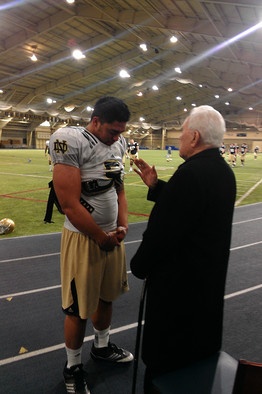 Not even a Catholic blessing could save Manti Te’o and the dying pop-culture Mormon moment he represents. (source: Wall Street Journal)

[cross-posted at Religion in American History]

Specifically, Stack drew readers’ attention to the Mormon story embedded within a fuller exploration of that subject at the Wall Street Journal: Star linebacker, Heisman Trophy runner-up, and devout Mormon Manti Te’o joins his teammates in “attend[ing] a Catholic Mass, receiv[ing] ‘a priest-blessed medal devoted to a Catholic saint,’ and ‘kiss[ing] a shrine containing two slivers Notre Dame believes came from Jesus? cross.'” He was even photographed receiving a blessing from Notre Dame president emeritus Father Theodore Hesburgh (a blessing Te’o reportedly sought out). Football team chaplain Father Paul Doyle explained that Te’o has privately told him that “he feels supported here [at Notre Dame] in his Mormon religion.”

All of this immediately brought to mind some of my previous thoughts on Mormon supplemental worship, in which Latter-day Saints supplement their Mormon activity by attending other Christian church’s services (a habit that dates back to at least the late nineteenth century). While the example provided by Te’o is clearly part of that larger historical tradition, it also strikes me as unique for a couple of reasons:

1. Most Mormon supplemental worship seems to take place in Protestant chapels instead of Catholic churches, joining a choir or playing the organ for the local Methodist church, for example, or tuning into televangelist Joel Osteen’s broadcasts on Sunday mornings before heading off to Sacrament Meeting. The supplemental worship of Manti Te’o, by contrast, is explicitly Catholic, and while I have previously expressed my own admiration for Catholic liturgy, I’ve never gone so far as to participate in the eucharist or receive a blessing from a Catholic Priest.

2. Manti Te’o is Hawaiian, and his Polynesian ethnicity introduces an important element to my considerations of Mormon supplemental worship. What role, if any, does race and ethnicity play in the ways Mormons choose to (or not to) supplement their regular worship? I can’t speak specifically to Te’o’s case (I’ve heard that the theological and political disputes that divide Protestants, Catholics, and Mormons in mainland America aren’t as pronounced among adherents in the Pacific Islands, but am happy to be corrected on that point), but I wonder about racial minorities closer to home. Do black Mormons, for instance, ever attend more traditionally black Protestant services? What about Latina/o Mormons and Spanish-language Catholic and evangelical services? I don’t have answers to these questions, and hope others will weigh in and share their experiences/observations. And I’d really love to see a more thorough and  scholarly examination of these issues—any takers?